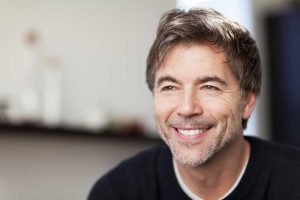 The prostate gland is a tiny organ, normally no bigger than a walnut, but it is at the center of the most important problems in men’s health. It is involved in everything from erectile dysfunction to cancer, and prostate problems will affect almost every man at some time in his life. If you have prostate enlargement or infection, or sexual side effects after prostate cancer therapy, Hayle Aldren, MD, MD(H), has years of experience treating prostatitis and enlarged prostate conditions without surgery. Contact Dr. Aldren’s office to schedule your consultation or book your appointment online today.

Prostate Enlargement and Prostatitis Q & A

What are the most important prostate problems that men face?

The top 3 prostate problems are prostate cancer, prostate enlargement, and prostatitis. The fact that the prostate is surrounded by a rich network of nerves traveling to and from other parts of the body, particularly the male sexual system, explains why it can cause so many symptoms in so many places. The prostate has even been known to influence the nerves controlling the heart, causing the heart to beat abnormally.

The treatment of prostate cancer causes many sexual side effects due to surgery, radiation, chemotherapy and hormone therapy. Thankfully most prostate cancer patients and survivors can be successfully treated for erectile dysfunction and any related sexual and urinary disability, thanks to Dr. Aldren’s background in rehabilitation oncology.

The most common cause of an enlarged prostate is the non-cancerous, age-related enlargement known as BPH (benign prostatic hypertrophy). This occurs at about the same rate as erectile dysfunction as men get older, and there is a connection and overlap between ED and the condition of your prostate.

Factors that lead to prostate enlargement include diabetes, insulin resistance, obesity, heart disease, lack of exercise, hormonal changes including conversion of testosterone to estrogen, and use of certain medications such as beta blockers. The most serious complications of prostatic enlargement are infections of the kidney and kidney failure due to blockage of urine flow.

What are the symptoms of an enlarged prostate?

An enlarged prostate causes two kinds of symptoms due to interference with urination: those related to irritation of the bladder and urethra, and those related to partial blockage of urine flow. These symptoms are sometimes known as prostatism or lower urinary tract symptoms (LUTS).

Irritation symptoms of prostate enlargement include:

Blockage symptoms due to an enlarged prostate include:

What are the symptoms of prostatitis?

If prostate enlargement and prostate cancer are the tip of the iceberg when it comes to the prostate, prostatitis is the least understood part below the surface. In spite of afflicting as many men as diabetes and heart disease, including 50% of all men at some point in their lives, prostatitis in all its forms remains challenging to diagnose and treat.

What are the different kinds of prostatitis?

It is caused by a bacterial infection. Diagnosis and treatment are usually fairly straightforward, and this is less common than other forms of prostatitis, only about 5% of cases. It typically clears up with antibiotics and heat.

Prostatitis with signs of inflammation on lab tests, but with no symptoms

It’s not really known how common this is, because men with no symptoms normally don’t get tested. It could be an early stage of prostatitis yet to come.

Chronic prostatitis due to resistant bacterial or other infections

This is the second most common type of prostatitis and often goes on for years with frequent relapses. It is thought that protective biofilms produced by bacteria are why the infection is so resistant to regular medical therapy. Chronic bacterial prostatitis can be a source for the spread of infection to other parts of the body, and may be a reason why infections like epididymitis keep coming back in some men.

This is the most common form of prostatitis, well over 50% of cases (as high as 90% by some estimates). Currently called Chronic Prostatitis (CP) if there are signs of inflammation, and Chronic Pelvic Pain Syndrome (CPPS) when inflammation is absent, it used to be called chronic non-bacterial prostatitis, prostatosis, or prostatodynia. Congestion and scarring are common and often extend outside the prostate.

This form of prostatitis (CP-CPPS) can be associated with nerve damage, or with autoimmune conditions like interstitial cystitis in some men. Heavy metals like cadmium can build up in the prostate and the resulting toxicity may provoke symptoms. Stones can form inside the prostate. Fibromyalgia and other painful muscle conditions are common, and tender trigger points are found in the abdomen, groin, hips, thighs, tailbone (coccyx), between the scrotum and anus, and in the rectum.

The actual cause of CP-CPPS is unknown and there are probably multiple causes. Flare-ups have been linked to constipation, bike or horseback riding, holding your urine too long, sexual excess or forced abstinence, alcohol, lack of sleep, and food allergies or gluten sensitivity.

How is prostatitis treated?

Because the range of symptoms is so wide, and the potential causes so many, the number of possible treatments is also large, in part because so many standard treatments are ineffective.

A full rectal exam for prostatitis also examines the pelvic floor muscles, the muscles, and ligaments on the side walls of the pelvis, and the interior of the tailbone area opposite the prostate. A sample of fluid from the prostate, obtained at the urinary opening during the exam, may be sent to the lab for analysis.

In a chronic infection, specific antibiotics, enzymes, immune stimulants, heat therapy, and other blood flow enhancers may help clear up an infection that otherwise will not heal. Phage therapy, a method in which viruses harmless to humans attack and eat disease-causing bacteria, may soon be available.

Dr. Leikind’s method of massaging the prostate and seminal vesicles can relieve congestion and reduce scarring in all forms of chronic prostatitis. Sound waves and other forms of energy medicine used in physical therapy can benefit CP and CPPS, and help break up and dissolve prostate stones. Acupuncture, neural therapy, sacral nerve electrotherapy (similar to TENS treatments), and biofeedback can help some patients.

Modern homeopathic injections sometimes help when everything else has failed. Because the prostate is so close to the rectum, nutritional supplements made into suppository form can reach their target more efficiently and at higher levels. Changes in diet may have a dramatic effect on reducing symptoms and flare-ups of prostatitis.

Have you been diagnosed with prostate enlargement or prostatitis, or think you might have it? Let the office of Hayle Aldren, MD, MD(H), in Phoenix offer new solutions for these frustrating problems. Call to schedule your consultation today.

Contact us today to get more information or request a consultation.